We have a mutual friend that introduced us at an R. Kelly concert and DJ PChris and I became members of a private sisterhood in a weird kind of way. She and I never mix crowds, we don’t call each other, and I have no idea what she likes to watch on TV. I will say this, I know she’s a really nice woman, she’s funny (as crap), beautiful (inside and out) and I can call on her to be there for me whenever I need her (except really early in the morning).

So it wasn’t a shock that she would agree to do a one on one for ThisRadioChickRocks, but I was surprised at what I learned about her.

Some of you may know her as Pam and that’s cool. Just get ready to change it to DJ PChris soon! This chick is doing big things!

See what I’m talkin about: 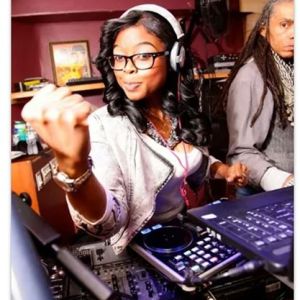 Where are you from?  I was born in Hawaii, and I’m a military brat so I lived everywhere,  but my home   is Baltimore,  MD.

How long have you been djing? 5 years

What do you love most about being a female dj? Shocking the masses when they realize a woman is mixing or rocking an event.

What genre of music do you like to listen to the most and why? That’s tough. It depends on my mood, but mostly gospel, reggae, and soul music. I’ve been listening to a lot of soft rock from the 90’s lately too

What is your LET IT GO song? (one that you would absolutely lose your mind listening to) hmmm that’s  tough too as far as a party song I don’t have one at the moment but in my chill time it’s Musiq and Chrisette Michele“Ahh” by Robert Glasper. 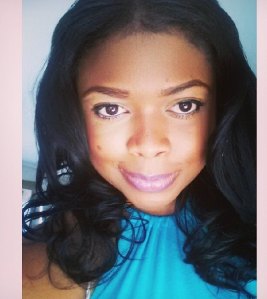 What’s the biggest misconception about being a female dj? That we only get booked for being a female or that we all wear jeans, hoodies and t shirts to dj in. I’m a professional and I dress in business attire when I go in the office so I wear “party” clothes including dresses and heels when I dj.

Who inspires (inspired) you?  My grandfather inspired me musically because he was a musician and I followed him around as a child until adulthood learning music because of him. My parents inspire me period because of their strength, resilience, and unconditional love

What don’t people SEE about DJ PChris? That I’m a geek and truly a loner. I love books, word puzzles, documentaries, and learning random facts. 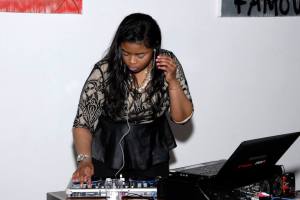 Do you feel this is what you want to do for a lifetime career? If not then what and why? I Honestly started dj’ing because I just enjoyed the art. I think people got really excited and wanted to give me a platform to display my talent,  thus my career. I think I will always dj, but I don’t want to be in the clubs djing for long. I have so many other talents and business goals to continue building a financial empire for my family.

Where do you see urban music in the next 10-15 years? I believe there’s gonna to be a turn for real hip-hop resurrection. People will get tired of the senseless, insipid music and rebirth a neo hip hop. Still youthful and relevant, but geared towards the original expression of art. Urban music in general will probably go towards pop like crossover tunes to continue sales.

What do you think is wrong, if you do, with hip hop and R&B? Everyone wants to act like they are rich, or over sexualize music. No one is discussing real life situations and love isn’t being taught or talked about. Sex and money is the motivation. After a while, it gets old.

Who do you think is the most underappreciated artist out there right now? Teedra Moses and Robert Glasper. Teedra has been on the scene for years. She can sing, harmonize and write music. She writes music that people can relate to and she’s consistent; whether it’s a mix cd or studio recorded album. Robert Glasper is an amazing musician that brings artists of all genres together and creates magic. He has music with people from Snoop Dogg, Brandy. Erykah Badu to Norah Jones, Faith Evans and Q-Tip.

What do you want your legacy to be? That when I dj’ed it was an experience. I educated the masses and brought back good memories during my set or an event. I wasn’t the typical dj.

Biggest regret is…. Not learning to dj earlier

Tell me a joke: Did you hear about the decapitated head they found in Druid Park?  It had a tag on it saying “I don’t need no body” (lol) I’m that corny. I’m not good with telling jokes, but I’m quick with the tongue so a person can get joked on.

4 thoughts on “She Rocks The Party In A Dress and Heels! One On One w/ DJ PChris”