She’s the voice you hear every morning cruising the streets of Washington, DC or anywhere for that matter, listening to the syndicated Russ Parr Morning Show. Meet the newest addition Miss. Brittany Waters or “2PrettyBritt“! She’s the chick who gives us LIFE with her Ratchet Reality Review and delivers her 2 cents on various subjects with a dynamic lineup!

Brittany and I met on the BET Honors red carpet and the amount of space she and I had to do our “thing”, it was a bit frustrating but she was a trooper. She politely asked me if I wouldn’t mind “scooching” over so that my shoulder wasn’t in her frame (she was filming her interviews for the morning show). I looked at her like “who is this chick?” but I understood she had a job to do and said “I’ll try but it’s going to be hard”. She smiled and that was that. After the chaos, she realized (I think) who I was and she introduced herself to me and said she was an admirer. I thought that was pretty cool of her and since then, I’ve been a fan!

Who is Brittany Waters tho? Where did she come from? How did she get started in radio? Questions I had no problem asking and she had no problem answering in our one on one:

How long have you been in the radio business?  I’ve been working in radio professionally for just about a year and a half. I also did sports radio all throughout college at University of Maryland, College Park. 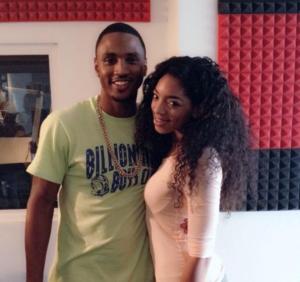 What was it about radio that struck your interest? It’s been my dream to be a broadcaster since first grade when I took my mom’s suit jacket and my ‘Barbie’ microphone to school on career day and told everyone I was Oprah. As I explored different outlets of broadcasting, I found radio to be very comfortable for me. I love talking to new people and making new friends and I feel like all of our listeners are like my friends and I can’t wait to tell them the latest news.

What genre of music do you like to listen to the most and why? I listen to R&B mostly because it tells a story that I can often relate to or think about. Listening to music for me is like reading a book.

What is your LET IT GO song? (one that you would absolutely lose your mind listening to) My song changes all the time. Of course Mary J. Blige’s “Just fine” because it starts with LET IT GO, Taylor Swift’s “Shake it off” and when I really need a confidence boost, Remy Ma’s “Conceited.”

You’ve interviewed a lot of celebrities, was there ever a time you had an uncomfortable interview where it went terribly wrong? Describe. Yes, being new in this business I’m definitely learning, growing and in the mistake stage. I do a segment on RPMS called “Britt’s Ratchet Reality Review.” I interviewed SWV on a red carpet and told them about it and asked them how real their reality show is saying, “I love ratchet reality shows, are you guys like this in real life?” Well they totally thought I was calling them ratchet and got offended… I somehow tried to make ‘ratchet’ seem like a compliment and then quickly changed the subject to their music! 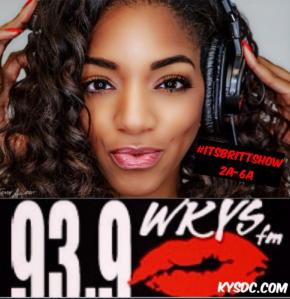 Who was the best celebrity encounter and why? When it comes to epic encounters I’d have to say Queen Mary J. Blige and August Alsina. MJB gave me goosebumps when talking about her passion for music. I could cry over her story and I definitely felt inspired. I mention August Alsina because the most recent interview I did with him, I felt super comfortable like we were homies just kicking it. I think we related so much because we are the same age and for the first time while interviewing a celebrity I felt completely comfortable and was having fun. I think it shows because to date it has the most hits on my YouTube page.

What’s the biggest misconception about you? Most of the people I work with are almost twice my age (They’re going to kill me for saying that). I’m not on their level professionally and I genuinely don’t get some of the jokes and banter because of the age gap. I think because of that people tend to think I’m young, naive and clueless. I’m definitely not “an airhead who got my job because I’m a cute little girl.” I believe I’m a hard worker who has been and will continue to work towards my career goals in broadcasting.

What don’t people get about music when it comes to radio? Most of the music on the radio has earned its spot!

Who do you most admire in the radio industry and why? I admire everyone on the morning show with me. They’ve taught me not just professional, but life lessons. Russ Parr, Alfredas, Supaken and Albert are all teachers. Before I met them, I’ve always looked up to Angie Martinez. Radio seems to be her passion and priority and with all her success she’s remained true to herself and humble. I just might have a groupie moment the day I finally meet Angie Martinez.

What was the best advice anyone ever gave you? Russ Parr taught me the two most important lessons of my career. Lesson #1 Be Yourself. When I first started I thought I needed to be more hood because I was working in urban radio and then when I did the news reports I’d try to sound like old Barbara Walters. Neither worked because I’m a terrible impersonator. Lesson #2 Stay humble.  Russ Parr is the most successful and humble person I know and I much appreciate that he puts me in check every now and then so I can be the same way. I started off very insecure. At age 22 I was not ready to be judged by our 2 million listeners and deal with twitter telling me I need a weave and I sound like an uneducated valley girl. Then over time I built confidence, ignored haters, got my braces off and then thought I was Kim Kardashian, a little overconfident. The last thing I’d ever want someone to think of me is that I’m pretentious.  So I always remind myself I have a long way to go and that everything I have now is because God blessed me with it.

What’s the biggest misconception about women in radio? People seem to think all women in radio have a “face for radio!” Most of the lady jocks I know are beautiful!

Where do you see urban radio in the next 10-15 years? Urban radio is evolving so fast. I think urban radio will be the standard radio. There’s more hip-hop and R&B on mainstream stations every day. The faces of rap are changing and becoming relatable to both the middle school white girl and the 30 year old Black woman. (Like Iggy Azalea and Nicki Minaj)

What do you think is wrong, if you do, with hip hop and R&B? I think Hip-hop is all over the place and at times incredibly difficult to relate to. Most of the people I know singing along about having money, cars, girls and mansions have none of that. And we certainly shouldn’t be “schmoney dancing” singing “Been selling crack since the 5th grade” while drugs are a serious problem in our community, but that’s another story… I just think we need more songs that make you say “yes this is so me right now,” even if it’s a fun track like Big Sean’s IDFWU because everyone has had a moment like that before.

Who do you think is the most underappreciated artist out there right now? Jhene Aiko. Way back in the day I was a huge B2k fan and she was signed to their label so I liked her too. For years I’ve been on her mixtapes waiting for her big break. I think she is such a talented writer and she is very different than any other R&B sound out right now.

(As you can see in the clip, my shoulder is ALL IN Brittany’s video! It wasn’t my fault! It was really tight in there! I’m so sorry Britt! On another note…MY HAIR WAS SNATCHED…teeee heeee)

Who’s in your iPod/radar? I’m always listening to Usher. I can’t wait for his new album to come out. He’s near perfect to me.

What do you want your legacy to be? To be someone “clothed in strength and dignity who laughs without fear of the future” (proverbs 31:25) And professionally to be someone that shared the lives of others to greater the lives of all because that to me is what journalism is all about.

Biggest regret is…. Not asking for a drop from Kanye West! I was so star struck I didn’t even think to ask if I could have my favorite rapper of all time say “This is Yeezus with Britt” or anything like that.

If you could be one of these, who would it be and why? (funny I know…but I’m curious)

Kardashian sisters: I’d be Kourtney because she has a lot of kids.

Girlfriends (cast) Joan because I’m always giving advice to friends whether the want it or not.

Sex In The City girls: Carrie of course because she’s a journalist!