You can hear DJ AngelBaby overnights, weekends and whenever she has time to work on 92Q Jams (Baltimore). She’s the co-host for the HIP HOP show #RapAttack w/ DJ AJ aka “Showtime” Sunday nights at 7PM!

She’s funny, sexy, smart, VERY OUTSPOKEN and extremely talented. She rocks the crowd for all types of genres and she’s not looking back for NUTHIN’ or NO BODY!

You can’t say DJ AngelBaby without adding her trademark “Owww Owww” and it’s a common phrase at parties, on the radio, and on her new mixtape #GetPumpedVol3 (available now).

Get to know DJ AngelBaby now because she’ll be gone I would say within the next year; dominating a top market either on radio or television…IF NOT BOTH!

How long have you been in the radio business? 8years

What was it about radio that struck your interest? The immediacy and the fact that I can give my opinions/views and the whole world (city/state whatever lol) will hear me.

What genre of music do you like to listen to the most and why? Hip-hop, bmore club (what I was raised on). Hip hop though, growing up with all boys I ain’t have a choice.

What is your LET IT GO song? (one that you would absolutely lose your mind listening to) hmm, I got a bunch of those but currently Big Sean “I.D.F.W.U”

You’ve interviewed a lot of celebrities, was there ever a time you had an uncomfortable celebrity interview or encounter where it went terribly wrong? Describe. Not really, although most of the celebrities I encounter are kinda’ dry in real life, I usually enjoy the artists and have fun getting to know them and getting them to open up.

What’s the biggest misconception about you? Hmm, not sure. *thinks for 5mins* yeah can’t come up with anything. I’m sure theres a bunch out there but I don’t subscribe to them I guess.

What makes a dynamic DJ/personality? A person that ppl can relate to; that’s normal you know. Not, the oh  “I woke up with this fully beat face and caviar for breakfast” person lol well if that’s you cool but to be dynamic you can’t be’ stuntin’ for the gram. 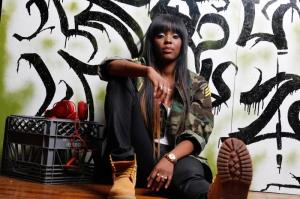 Why is it hard for female DJ’s to be taken seriously? Because guys think they’re the best at EVERYTHING lol Sike naw, I think women are taken seriously. The women that respect the craft, hone their skills and do it just as well (if not better) as the fellas will always get their respect.

What DJ/personality do you admire the most? I love me some Big Tigger. What he’s done as far as tv/radio, his non-profit and more. I used to model my career after his. He’s definitely an inspiration (don’t judge me)

What was the BEST advice you ever got and by whom? This was totally random, It was a girl traveling with a popular rap group at the time. She shared this quote with me “First they ignore you, then they laugh at you, Find out you’re a threat; then they attack you” and told me to always stay on my path. I live by that!! Stay on your path man, and if you don’t see it or have it…start making one!!

If you weren’t a personality/DJ, what would you be doing? Probably running my non profit and saving these young girls out here.

Where do you see urban radio in the next 10-15 years? Definitely more digital. Internet radio and streaming is everywhere.

What do you think is wrong, if you do, with hip hop and R&B? Everybody wants to latch on to what other ppl are doing. You’ll see an artist with a particular style become successful…next thing you know its 20 more like him/her. The originals are always the shhh. The legends are always the first.

Who do you think is the most underappreciated artist out there right now? Definitely J. cole  in hip hop, in r&b maybe Jazmine Sullivan…both of them should be mega superstars by now

Who’s in your iPod/radar? Fab’s “The Young O.G. Project” since it just dropped…I gotta give it a listen (or two or three)

What do you want your legacy to be?  I’m a “Girl Power” kinda’ chick. I love to see successful women helping other up and coming women; throwing the rope back over ya’ know. I wanna pave the way for some other female personalities, dj’s or whatever that saw me and said “She did it…why can’t I”

Biggest regret is….none. maybe if I coulda’ started all this at like the age of 5 so I can be some type of prodigy by now…lol j/k

If you could have a DJ spin off with one DJ in the world, who would it be and why? Prolly Dj Jazzy Jeff cuz he’s just dope. Flat out!! Like he’s so dope its sickening lol

Read more on these RADIO/DJ chicks:

She Rocks The Party In A Dress and Heels! One On One w/ DJ PChris

5 thoughts on “Whatchu Know About That Owww Owww Chick?: One On One w/ DJ AngelBaby”